British warship patrols between TCI and Haiti
Published on April 30, 2013

The ship, which is on the UK’s Atlantic Patrol Task (North), in support of the Overseas Territories, patrolled the waters between TCI and Haiti at the request of the Governor’s Office after the recent flurry of attempts to enter the territory illegally.

Wave Knight also passed Salt Cay, Grand Turk and South Caicos on Sunday morning, before looping around North and Middle Caicos and Providenciales in the afternoon.

During her passage south of Salt Cay Wave Knight took the opportunity to observe and gather information on the presence of vessels fishing the Mouchoir Bank.

The Atlantic Patrol Task (North) commitment has one or more UK warships stationed in the Caribbean to provide disaster relief during hurricane season, and to work with other nations to prevent people and drug trafficking. When time permits other tasks are undertaken such as fisheries protection in the waters of the Overseas Territories. 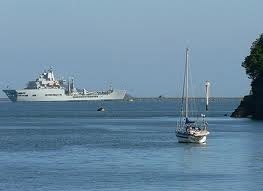