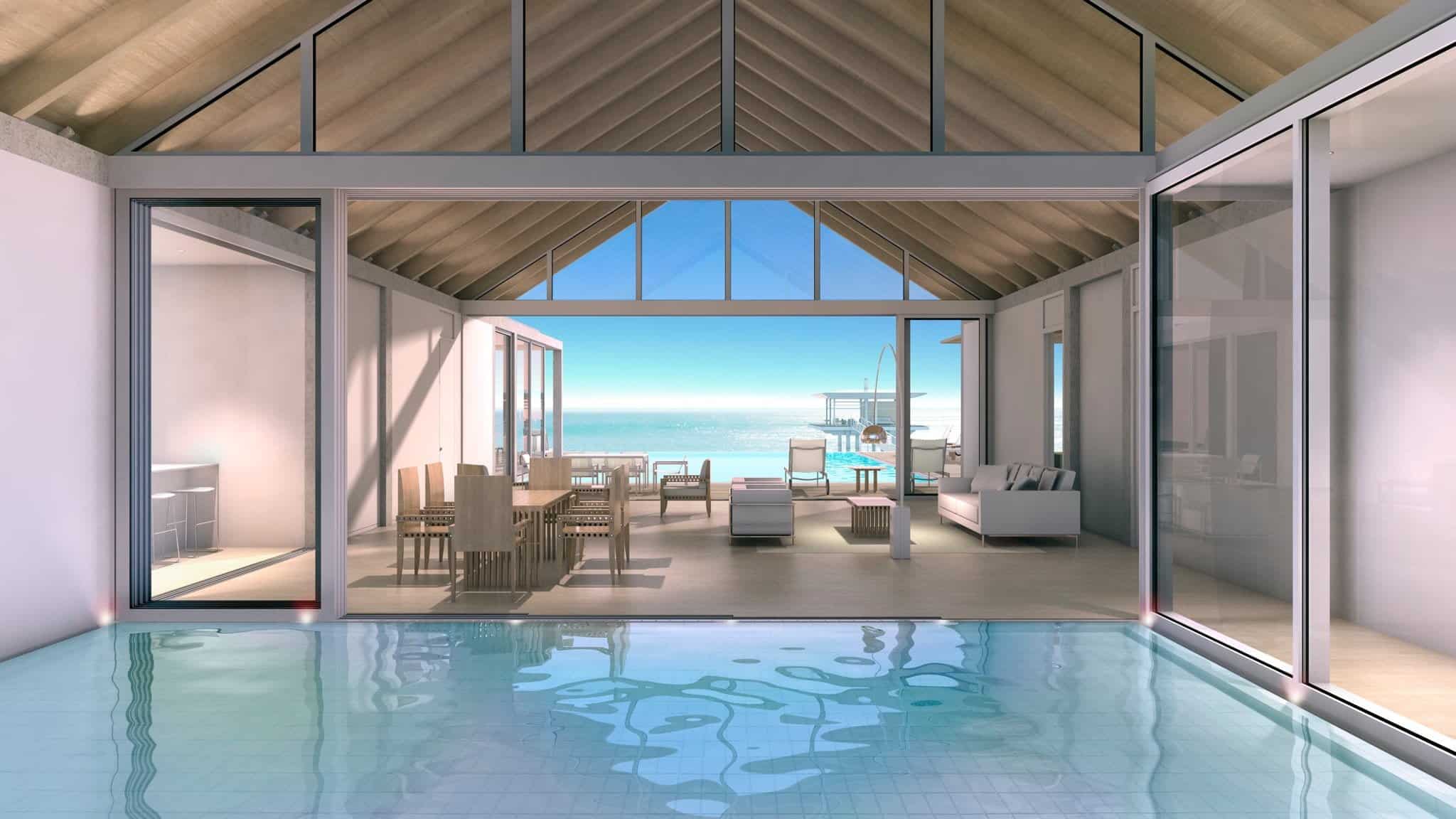 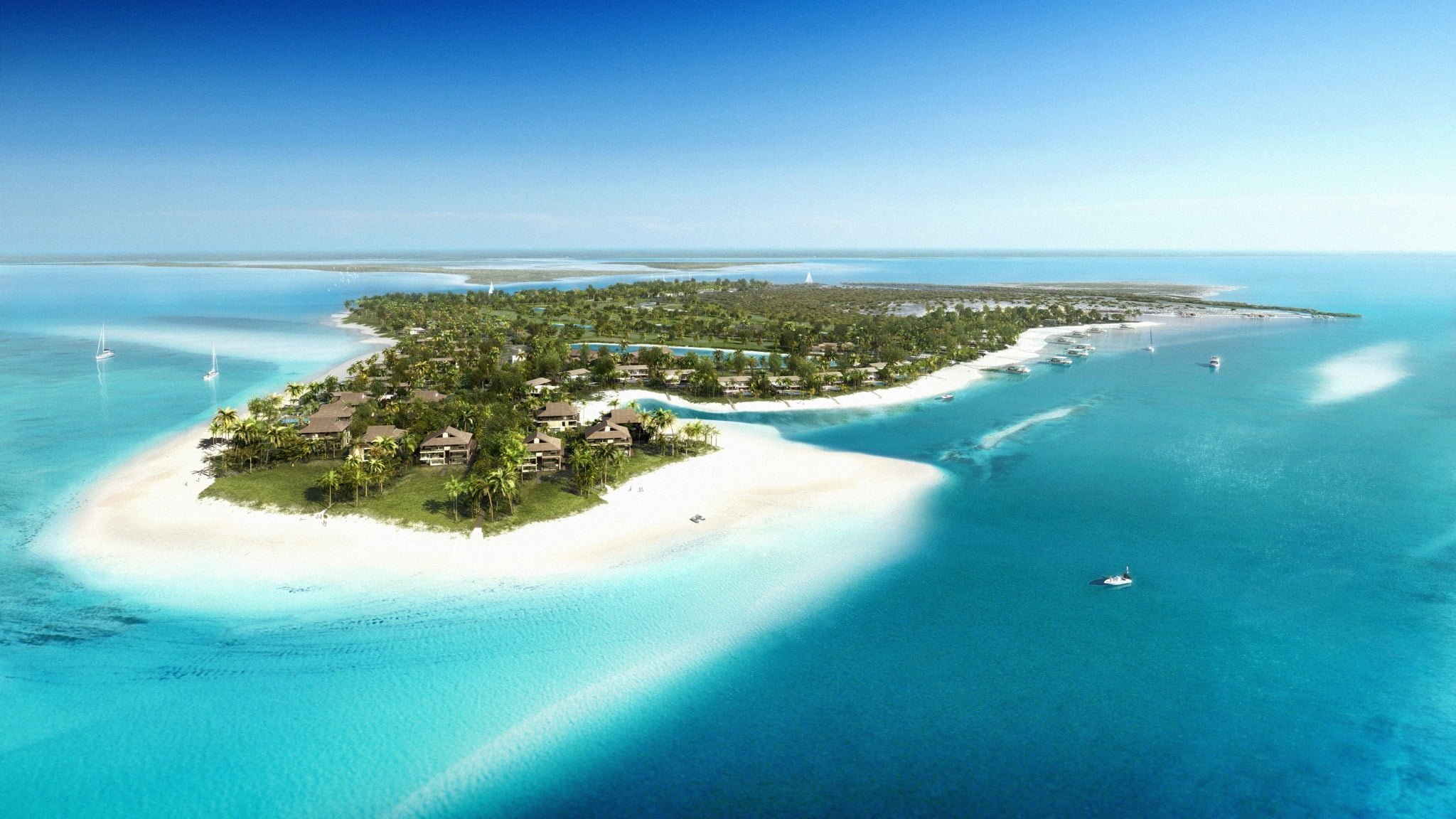 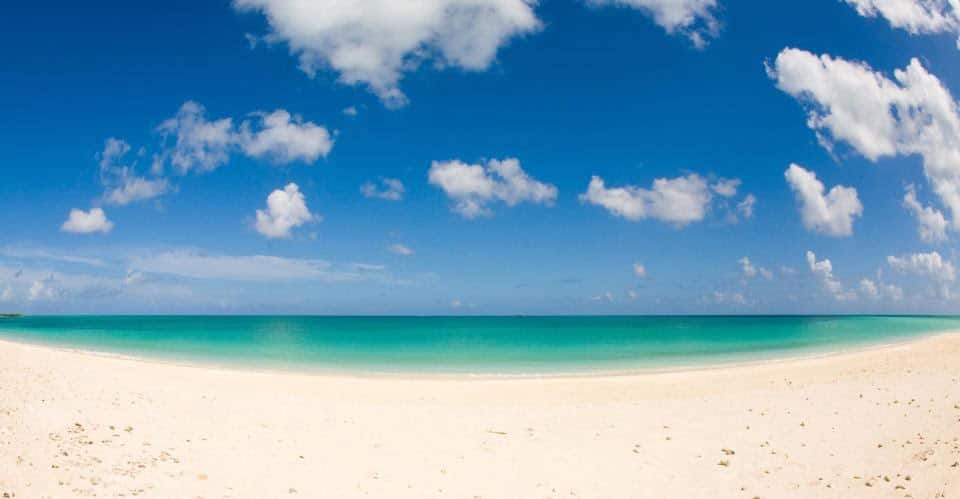 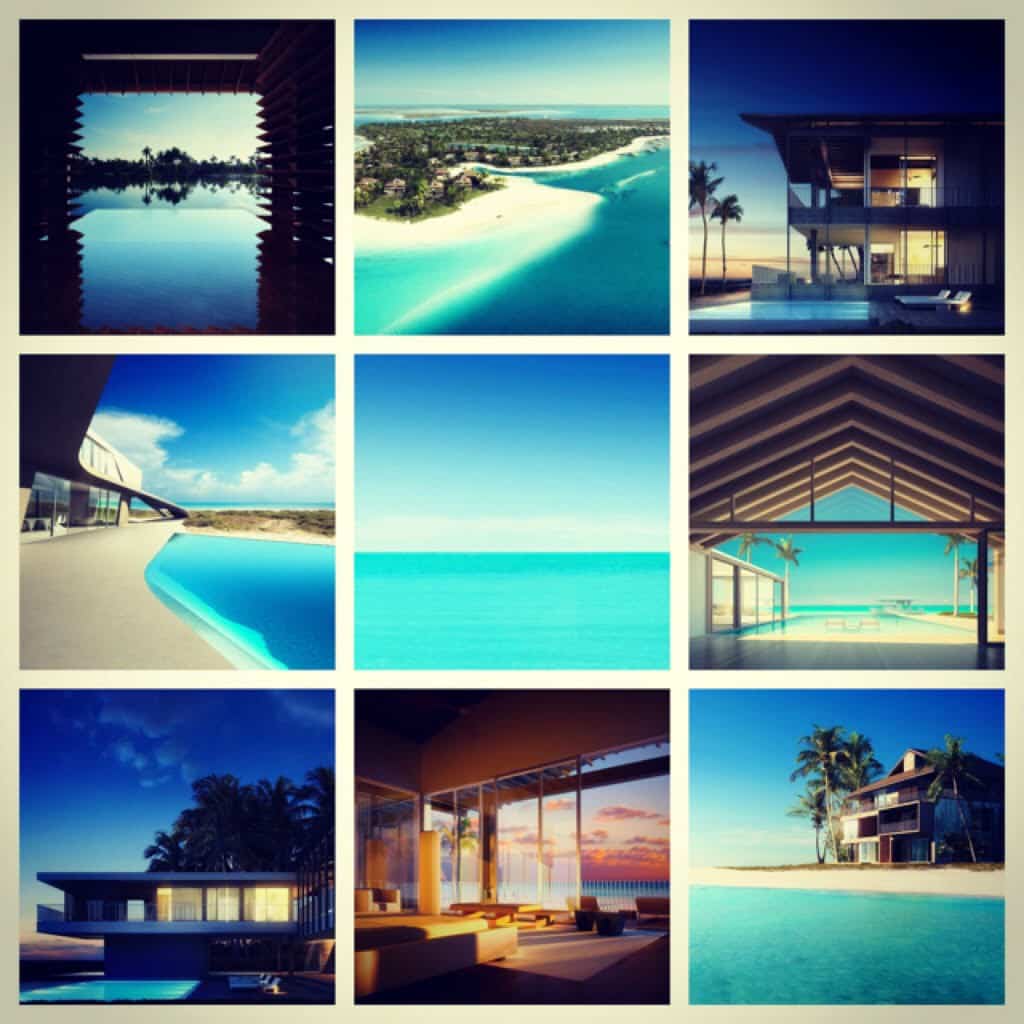 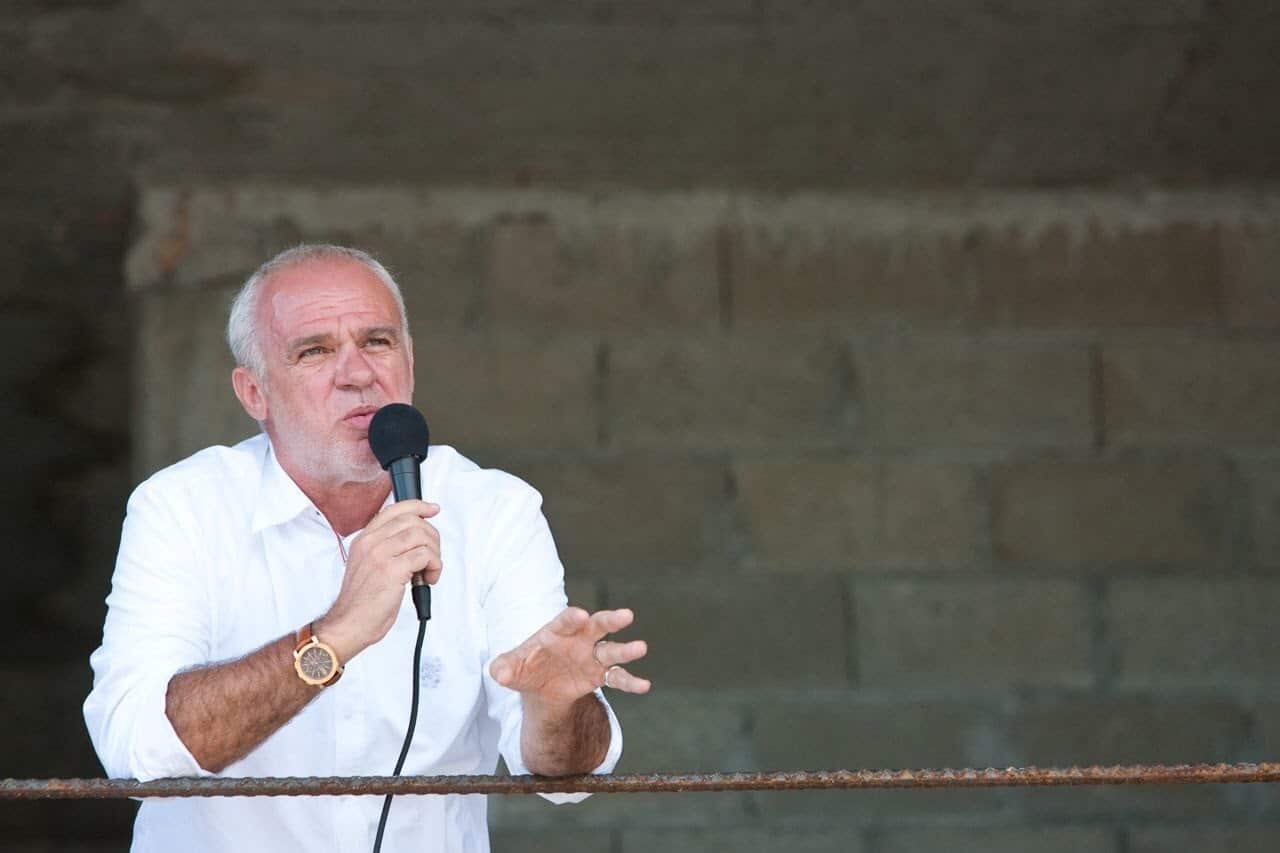 Please click on the link to read about Cem Kinay and his life  with a lot of pictures. 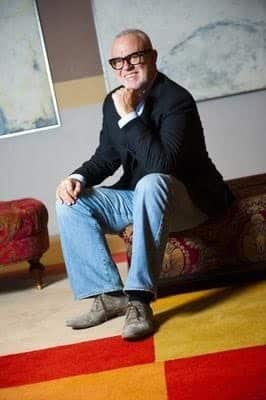 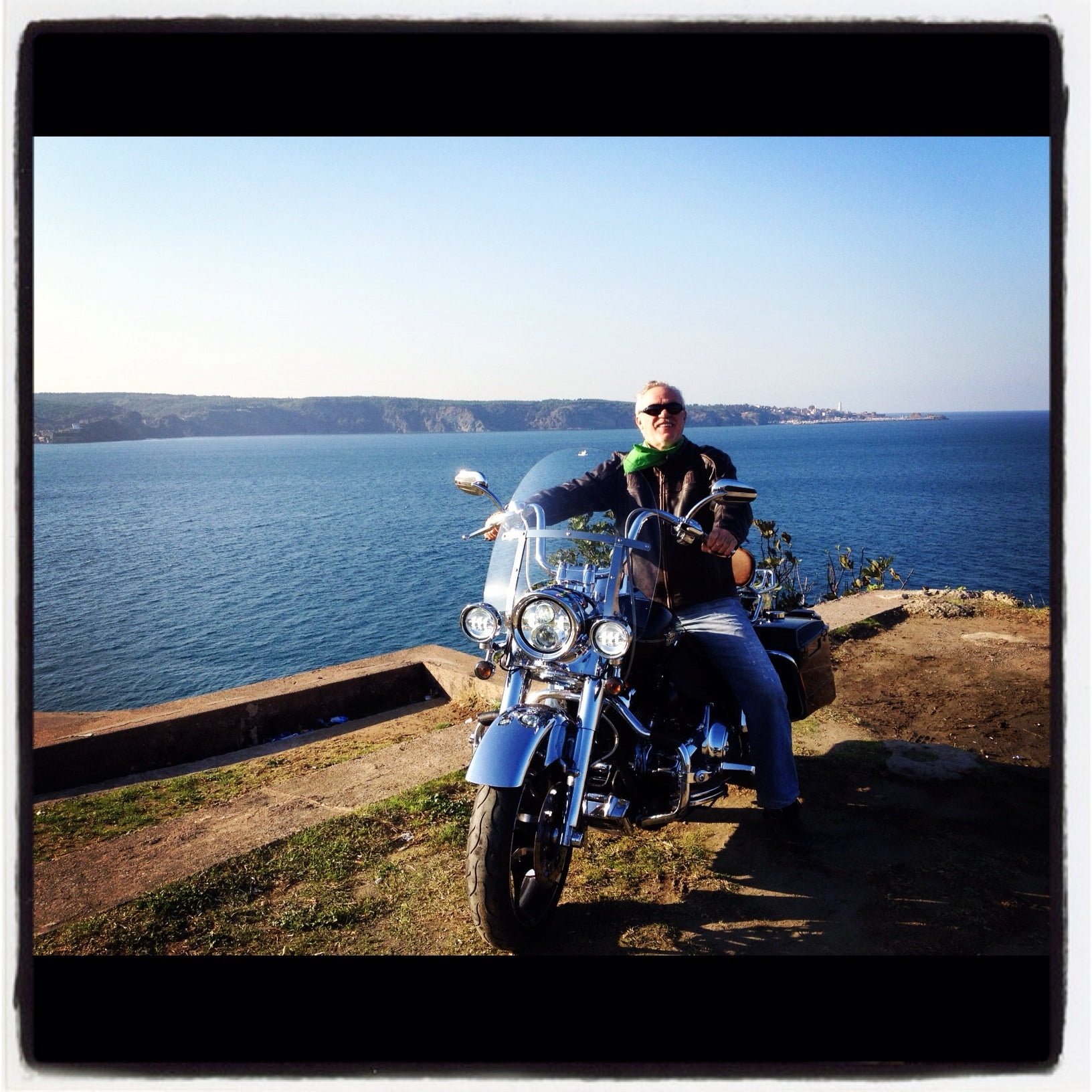 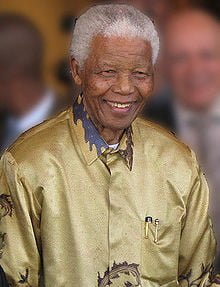 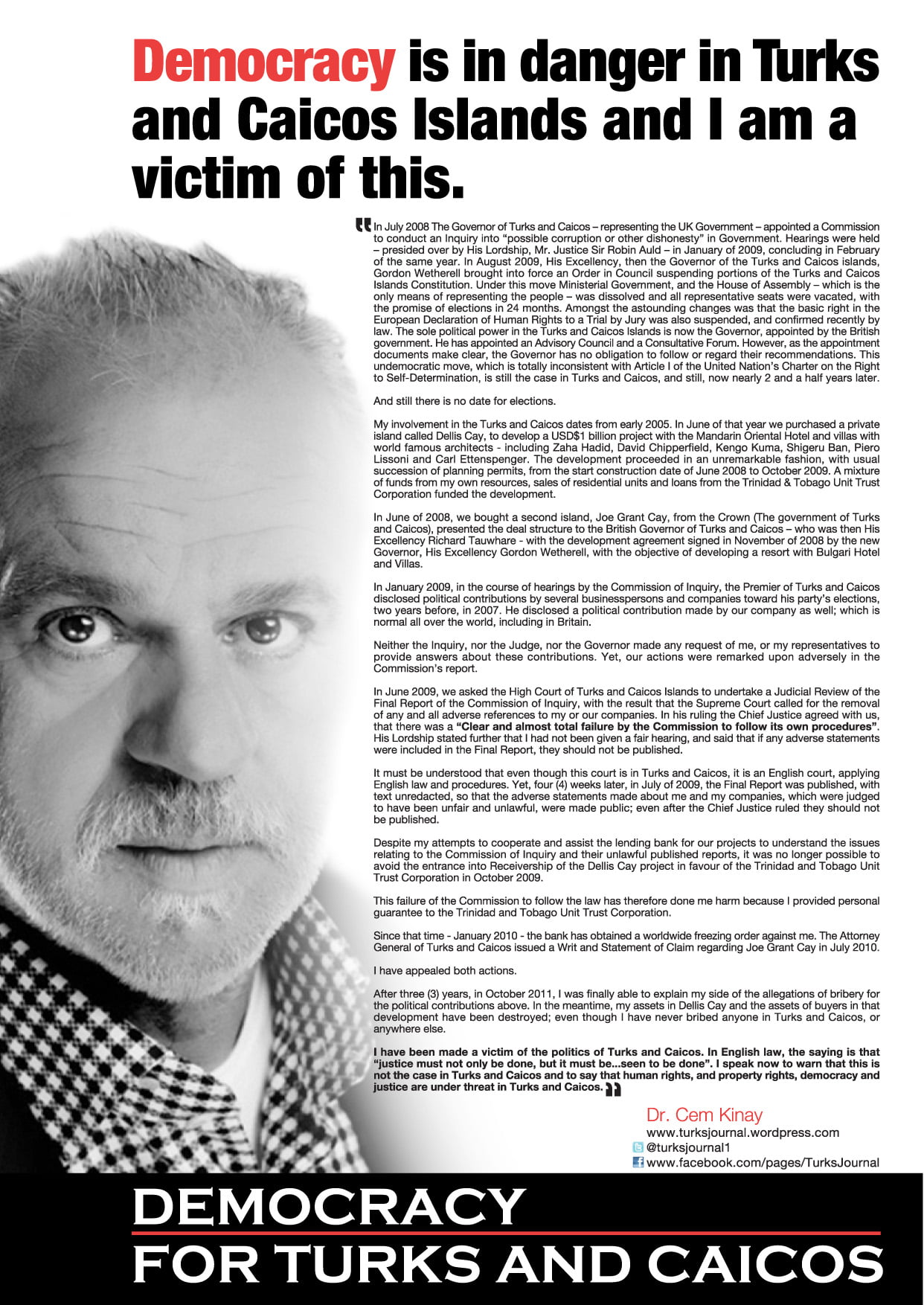 Democracy is in danger in Turks and Caicos Islands and I am a victim of this.

In July 2008 The Governor of Turks and Caicos – representing the UK Government – appointed a Commission to conduct an Inquiry into “possible corruption or other dishonesty” in Government. Hearings were held – presided over by His Lordship, Mr. Justice Sir Robin Auld – in January of 2009, concluding in February of the same year. In August 2009, His Excellency, then the Governor of the Turks and Caicos islands, Gordon Wetherell brought into force an Order in Council suspending portions of the Turks and Caicos Islands Constitution. Under this move Ministerial Government, and the House of Assembly – which is the only means of representing the people – was dissolved and all representative seats were vacated, with the promise of elections in 24 months. Amongst the astounding changes was that the basic right in the European Declaration of Human Rights to a Trial by Jury was also suspended, and confirmed recently by law. The sole political power in the Turks and Caicos Islands is now the Governor, appointed by the British government. He has appointed an Advisory Council and a Consultative Forum. However, as the appointment documents make clear, the Governor has no obligation to follow or regard their recommendations. This undemocratic move, which is totally inconsistent with Article I of the United Nation’s Charter on the Right to Self-Determination, is still the case in Turks and Caicos, and still, now nearly 2 and a half years later.

And still there is no date for elections.

My involvement in the Turks and Caicos dates from early 2005. In June of that year we purchased a private island called Dellis Cay, to develop a USD$1 billion project with the Mandarin Oriental Hotel and villas with world famous architects – including Zaha Hadid, David Chipperfield, Kengo Kuma, Shigeru Ban, Piero Lissoni and Carl Ettenspenger. The development proceeded in an unremarkable fashion, with usual succession of planning permits, from the start construction date of June 2008 to October 2009. A mixture of funds from my own resources, sales of residential units and loans from the Trinidad & Tobago Unit Trust Corporation funded the development.

In June of 2008, we bought a second island, Joe Grant Cay, from the Crown (The government of Turks and Caicos), presented the deal structure to the British Governor of Turks and Caicos – who was then His Excellency Richard Tauwhare – with the development agreement signed in November of 2008 by the new Governor, His Excellency Gordon Wetherell, with the objective of developing a resort with Bulgari Hotel and Villas.

In January 2009, in the course of hearings by the Commission of Inquiry, the Premier of Turks and Caicos disclosed political contributions by several businessperson and companies toward his party’s elections, two years before, in 2007. He disclosed a political contribution made by our company as well; which is normal all over the world, including in Britain.

Neither the Inquiry, nor the Judge, nor the Governor made any request of me, or my representatives to provide answers about these contributions. Yet, our actions were remarked upon adversely in the Commission’s report.

In June 2009, we asked the High Court of Turks and Caicos Islands to undertake a Judicial Review of the Final Report of the Commission of Inquiry, with the result that the Supreme Court called for the removal of any and all adverse references to my or our companies. In his ruling the Chief Justice agreed with us, that there was a “Clear and almost total failure by the Commission to follow its own procedures”. His Lordship stated further that I had not been given a fair hearing, and said that if any adverse statements were included in the Final Report, they should not be published.

It must be understood that even though this court is in Turks and Caicos, it is an English court, applying English law and procedures. Yet, four (4) weeks later, in July of 2009, the Final Report was published, with text unredacted, so that the adverse statements made about me and my companies, which were judged to have been unfair and unlawful, were made public; even after the Chief Justice ruled they should not be published.

Despite my attempts to cooperate and assist the lending bank for our projects to understand the issues relating to the Commission of Inquiry and their unlawful published reports, it was no longer possible to avoid the entrance into Receivership of the Dellis Cay project in favour of the Trinidad and Tobago Unit Trust Corporation in October 2009.

This failure of the Commission to follow the law has therefore done me harm because I provided personal guarantee to the Trinidad and Tobago Unit Trust Corporation.

Since that time – January 2010 – the bank has obtained a worldwide freezing order against me. The Attorney General of Turks and Caicos issued a Writ and Statement of Claim regarding Joe Grant Cay in July 2010.

I have appealed both actions.

After three (3) years, in October 2011, I was finally able to explain my side of the allegations of bribery for the political contributions above. In the meantime, my assets in Dellis Cay and the assets of buyers in that development have been destroyed; even though I have never bribed anyone in Turks and Caicos, or anywhere else.

I have been made a victim of the politics of Turks and Caicos. In English law, the saying is that “justice must not only be done, but it must be…seen to be done”. I speak now to warn that this is not the case in Turks and Caicos and to say that human rights, and property rights, democracy and justice are under threat in Turks and Caicos 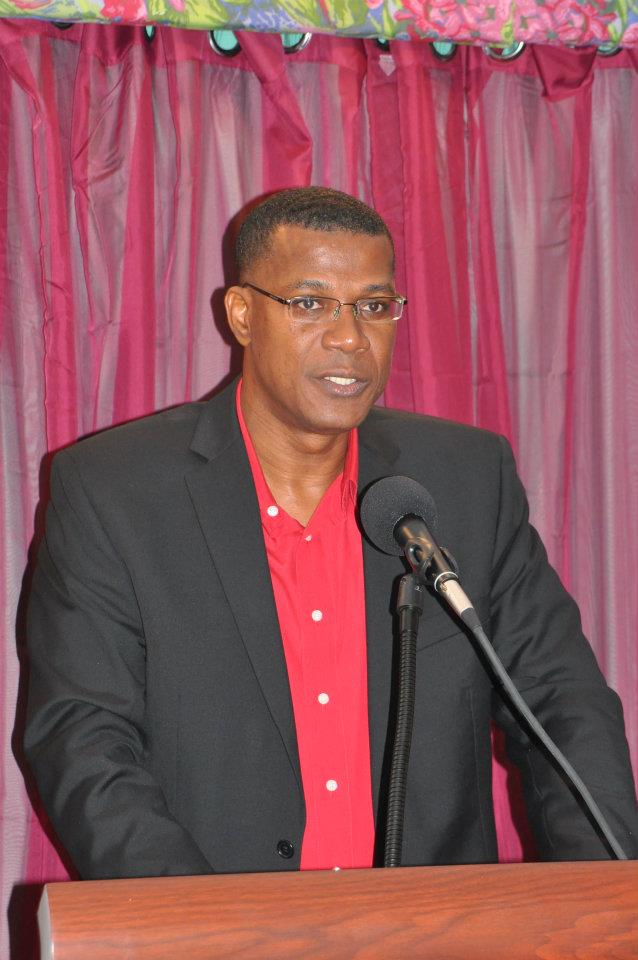 Dr.Rufus Ewing had a speech at the PNP rally in Providenciales and the country is talking about his speech.

He delivered by this speech his vision 20/20 for the country.

He would very soon release the specifics of his 20/20 vision.

He is talking about sign of victory,victory for the people of TCI.He wants restore democracy and he wants remove the people from the claws of the British.

He wants to lead the TCI people to a place of social,mental,economic and political independence.

Respecting of Human Rights and Dignity

are the main milestones of his 20/20 Vision.

THANKS A LOT FOR  THE COMMENTS AND CONGRATULATIONS.THANK YOU.

never ever give up!

nicely done! Hoping for good fortune in TCI as well.

Congratulations for the achievement. After all there is justice in few places in our tough world.
I believe that with your keen persistence you shall succeed to bring Dellis Cay project  to a glorious completion.
Yours truly

That is the way to hang in there. Congradulations and let us hope the best for the project.

I am very happy for you….

Thanks Cem, hopefully this will give the new investors a little breathing room.

Dr in my honest and humble opinion and based on my 30 year experience in dealing with the upper echelon of business Entrepreneurs’  and professionals, in the highest of the Automobile  Sales industry. Dr Cem Kinay is and will always be one of most proper and honest clients I have had the privilege to meet, interact and do business with. I wish you much success .

Dear Cem!
Finally, some good news!  We congratulate you.

EXCELLENT, CONGRATULATIONS!!! They put you and your family through the ringer. You have and will survive and succeed. I love you guys and soon we will have turned the corner with peace of mind, happiness and bliss. There is an old saying that applies, “Let the work I have done, speak for me. ”
Much love and many blessings,

Very, very happy for you!!

BY BARACK OBAMA,President of America

“It took a lot of blood, sweat and tears to get to where we are today, but we have just begun. Today we begin in earnest the work of making sure that the world we leave our children is just a little bit better than the one we inhabit today.”

“Focusing your life solely on making a buck shows a certain poverty of ambition. It asks too little of yourself. Because it’s only when you hitch your wagon to something larger than yourself that you realize your true potential.”